Coffee lingo can confuse the best of us as the terms often sound similar and recipes have small variations. The answer to the question; What is a Frappé? Can also mean different things in different countries. As far as the Frappé goes it is generally very similar to a Starbucks branded Frappuccino but it is made with instant coffee instead of espresso.

If you’ve not visited a Starbucks and have no idea what we’re talking about that’s ok, in short, it’s a cold coffee drink mixed with milk or ice cream (depending on the country), sugar, ice and topped with whipped cream.

The term Frappé is widely used but the ingredients will vary by location and even between shops. So be mindful where you are before you order.

Sometimes it’s even made with fruit instead of coffee so the answerer to this question isn’t clear cut. Let’s have a look at the finer detail of the Frappé.

The Origins of the Frappé

The humble Frappé has a French name that was first described at the start of the 19th century. There were many similar drinks documented, mostly resembling some sort of iced slushy/coffee concoction.

Several years later a Dritsas’ employee, Dimitris Vakondios wanted to have his normal instant coffee during his break. But he didn’t have any hot water so he just mixed his coffee with cold water and ice in a shaker. The drink became very popular in Greece and is the most widely used recipe for the Frappé.

If you’re ordering a Frappé in France, however, you may get something slightly different. You might end up with a coffee blended with ice cream and ice, depending on where you’re ordering from. Either way, it will be a cold coffee so you’ll get your caffeine fix! Well, most times anyway.

What is the Definition of a Frappé?

The most widely accepted definition of a Frappé and the one listed on Wikipedia is instant coffee blended with milk, sugar and ice. Sometimes flavours are added such as vanilla or hazelnut.

The ingredients are put into a blender or shaker and are blended together so that it creates a foamy iced drink. If you use a blender with an ice crusher this will create a slushy type feel to the Frappé. It’s then topped with whipped cream or ice cream, whichever you prefer.

Getting A Frothy Top without Whipped Cream

The more traditional version of the Frappé is generally not served with ice cream or whipped cream. However, it still has a nice and frothy top. So how does this work?

If you use spray-dried instant coffee to make your Frappé you’ll end up with a nice frothy top. This is because spray-dried coffee contains very little oil, which will allow the frappé to form a thick layer of foam.

The longer you blend the coffee the thicker the foam will be. Up to a point of course. When using freeze-dried instant coffee or espresso there will generally be less foam which is why some will add ice-cream or whipped cream.

What is the Difference Between a Frappé and Frappuccino?

New England’s Frappé is a whole different drink entirely. It’s more like a milkshake, made with ice cream that can contain fruit rather than coffee.

There are quite a few countries that will serve a Frappé as a fruit milkshake type drink that contains ice cream and is topped with whipped cream. We’ve been served a fruit ice cream shake in South Africa called a Frappé, but it was clear that you can choose your fruit flavour from the menu so it was easy enough to put 2 and 2 together! So again, double-check before you order as you might not get what you thought you ordered. 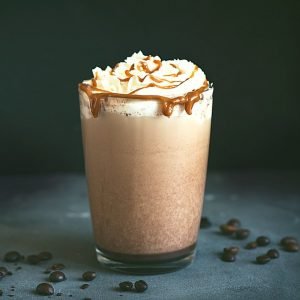 Closing Thoughts on the Frothy Drink

In essence, the waters are a bit murky when it comes to answering the question What is a Frappé?

Simply because the answer is not a straight forward one and can cause a heated debate as it can mean different things to different people. It all depends where you are from or where you are ordering your Frappé.

To sum it all up it can be a cold coffee drink made with instant coffee and sometimes espresso or drip coffee. Or it can be a fruit drink with milk and ice cream. Either variation will be cold, mixed with ice and can be topped with whipped cream or ice cream. Or if you’re using the more traditional spray-dried instant coffee in your Frappé the foam produced by blending the ingredients will produce a nice thick layer of froth on top so you won’t need extra cream or ice cream.

Simple right? It’s about as organised as a bull in a china shop…

Manage Cookie Consent
To provide the best experiences, we use technologies like cookies to store and/or access information. Consenting to these technologies will allow us to provide the best experience while you're on our website. Not consenting or withdrawing consent, may adversely affect certain features and functions.
Manage options Manage services Manage vendors Read more about these purposes
View preferences
{title} {title} {title}
Scroll to Top